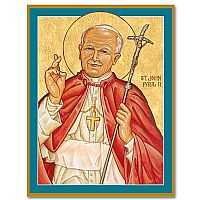 Image of Blessed Pope John Paul II holding his cross crosier in his left hand and his right hand is extended in blessing.

Soon after the passing of Pope John Paul II, his successor, his Holiness Benedict XVI, decreed that he would waive the waiting period for his cause for sainthood.  This announcement was greeted with much excitement as Santo Subito (“Sainthood Now!”) had been cried by crowds of the faithful at John Paul’s funeral, and this fervor had persisted.  Upon confirming the first of two miracles attributed to the deceased pontiff’s intercession, Pope Benedict beatified John Paul II on May 1, 2011.
Pope John Paul II was canonized along with Pope John XXIII by Pope Francis on April 27th, 2014, the octave day of Easter which Pope John Paul II had designated in 2000 as Divine Mercy Sunday in the Roman Calendar.  Pope Francis' remarks on the day of canonization summarize well the lives of these holy men:  "May both of them teach us not to be scandalized by the wounds of Christ and to enter ever more deeply into the mystery of divine mercy, which always hopes and always forgives, because it always loves."

This image of Saint Pope John Paul II, the most photographed pontiff of all time, is painted in the stylization characteristic of icons as a way to indicate to the viewer that this is an image of the Pope as he is now, glorified in heaven.
This icon depicts a bust portrait of Saint John Paul II wearing the ordinary vesture of the Holy Father: the simar, or white cassock with shoulder cape; a white fascia, or sash at the waist; and a white zucchetto, or skull cap.  He also wears a red cape tied by braided gold and red cords. Although red is one of the papal colors, white is the primary symbol of the Papacy because of the tradition begun by Pope St. Pius V (1504-1572) who decided to wear his Dominican habit, rather than the traditional red robe. The Pope also wears the gold pectoral cross worn by prelates in the Roman Rite.
On his right finger, the Pope wears a ring known as the Fisher’s Ring, which depicts St. Peter in a fishing boat encircled with the Pope’s name.  As the successor to St. Peter, he too, is called to be a “fisher of men” (cf. Mt. 4:19).  The first mention of the Fisher’s Ring was in 1265 by Pope Clement IV, who indicated that it was used to seal letters of private, as opposed to public, correspondence.  In the Holy Father’s other hand is the Papal Cross, which is carried by popes instead of the usual bishop’s crosier. It symbolizes that while the Pope is the Vicar of Christ on earth, Christ is the true head of the Mystical Body—the Church—and is present to His faithful in His vicar.  The crucifix depicted in this icon was designed by the Italian sculptor Lello Scorzelli and was first used by Paul VI.  A distinctive feature of this crucifix is the slightly bent cross bar, reminiscent of an Eastern Catholic or Orthodox bishop’s staff (paterissa).  The Pontiff’s right hand is raised in a traditional form of blessing used in the Eastern Church. Pope John Paul II was quick to remind Latin Rite Catholics that the Catholic Church breathes with two lungs, those of the Eastern and Western Rites.  His thumb, ring finger and little finger are bent together, symbolizing the divine and human natures of Christ, while the forefinger and slightly bent middle finger are held upright to show the descent of the Second Person of the Trinity in the Incarnation.  As sinners, we are given hope through the grace that is depicted in an icon.  How poignant it is that Pope John Paul II, who announced a universal call to holiness, is now continuing that same ministry in a new way through this holy image. 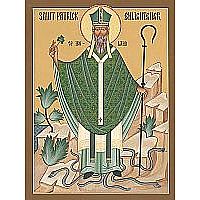 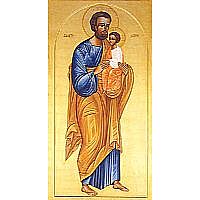 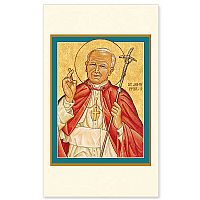 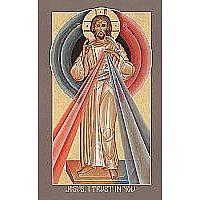 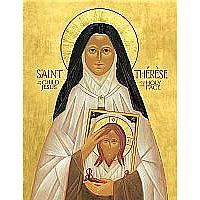