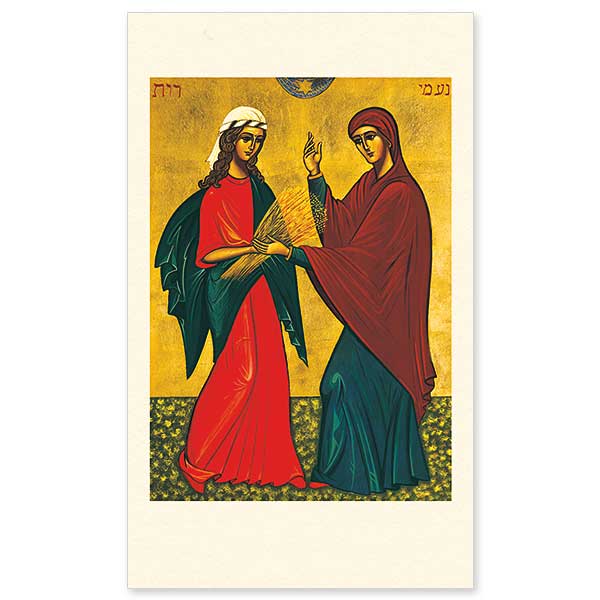 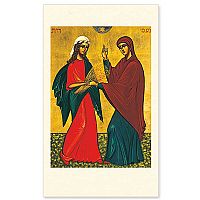 "Where you go, I will go; where you lodge, I will lodge; your people shall be my people, and your God my God.” (Ruth 1:16) These famous words of love and devotion were spoken by the Moabite woman Ruth to her mother-in-law Naomi, a Hebrew widow. Ruth became the great-grandmother of King David.

But Ruth said, "Do not press me to leave you or to turn back from following you! Where you go, I will go; where you lodge, I will lodge; your people shall be my people, and your God my God. (Ruth 1:16) These famous words of Ruth are often repeated at weddings because they are such wonderful words of love and devotion. What isn’t usually mentioned at those weddings is that Ruth’s words were directed toward her mother-in-law, Naomi and not to a sweetheart or husband. The book of Ruth in the Old Testament was written by the prophet Samuel and describes with beautiful simplicity the story of a Moabite woman who converted to Judaism and became the great-grandmother of David (in about 1100 BC). Ruth is one of the "historical" books of the Hebrew canon and serves to illustrate how God takes care of those who put their trust in Him. The composition of this icon is ancient in style but modern in subject. Ancient Orthodox icons dealt only rarely with Old Testament subjects.

This icon presents to us the two women, Ruth the young Moabite and Naomi, the Israelite mother of her dead husband. Ruth is handing to Naomi some sheaves of barley she gleaned from the field of Naomi’s kinsman, Boaz. Naomi calls upon God to bless Boaz’ generosity: "Blessed be he by the LORD, whose kindness has not forsaken the living or the dead!" (Ruth 2:20)

Naomi is dressed as all biblical women are dressed in iconography, in a dress and a hooded cloak called a maphorion. Ruth’s garb is clearly different, with hair exposed and an Arab-like head covering reflecting her Moabite origin. Their faces are drawn in symbolic iconographic style, rather than with an attempt at realistic portraiture. The noses are long and slender, conforming to the Byzantine ideal of nobility. Their eyes are overlarge and soulful, indicating spiritual depth. The mouths are small and closed in the silence of contemplation. Within these constraints, Sister Marie-Paul has nevertheless managed to convey the extreme beauty of Ruth coupled with her gentle humility that so readily captivated Boaz and the depth of wisdom and faith in God despite adversity possessed by Naomi.

The top center of the icon is occupied by a symbol of the Heavenly realm, including a six-pointed Star of the David to come. "Ruth" and "Naomi" are spelled out in their native Hebrew in the upper corners. The background is gold leaf, used in icons to symbolize Divine Light because of the metal’s ability to reflect light in a manner so different from pigment. 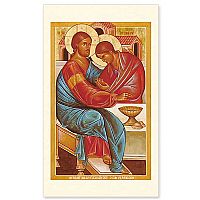