Our Lady of Vladimir 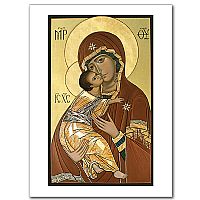 "My soul magnifies the Lord, and my spirit rejoices in God my Savior"

This simple and elegant icon of the Virgin and Child is patterned after a very famous original, painted in 12th century Constantinople, and referred to by many names; “The Virgin of Tenderness," “The Soul of Russia," and most frequently, “Our Lady of Vladimir." The optional memorial of Our Lady under this title is celebrated on May 21. Card size 4 3/8" x 6".

Icons of Mary and the Christ Child have a long and rich tradition in the Eastern churches. The first one was painted by Luke with Mary herself as a model according to ancient legend. There are more than 150 named versions in Russian iconography alone. These icons are much more than portraits of mother and child. They are the principle images of the Incarnation (God become man), and of the Church, representing communion of the Divine (the Child/Word of God) and the human (Mary). These icons may be classified into groups based on the degree of relationship or affection between mother and child that is shown to us. The earliest ones show Jesus enthroned on Mary’s arm, both facing the viewer, with no human affection whatsoever (Hodigitria types). Icons from the late Russian period show very great affection being expressed in both directions (Umilenie or Glykophilousa types). This icon is intermediate, both in history and emotion, and is classified as a "Virgin of Tenderness" type. The original Our Lady of Vladimir was painted by an anonymous Byzantine iconographer in the style of the Macedonian period (857 - 1056 AD). The icon was brought to Kiev in 1131, then transferred to the city of Vladimir in 1155, thus its present name. In 1395, it was again transferred to Moscow where it remains to this day, now in the Tretyakov Gallery. The icon has been present at a great many political events in Russian history, and is famous for many miraculous interventions. It has managed to survive numerous fires and Tartar attacks. Because of this, the icon has also been called "the soul of Russia." Our Lady of Vladimir is one of the most famous and most frequently copied icons of all time, due both to its long association with Russian religion and politics and to its extraordinary beauty. Our reproduction is of a twentieth century rendering, clearly and beautifully executed by Sister Mary Charles.

The young Jesus presses his cheek to his mother’s, wrapping his left arm around her neck. Mary holds Him close with her right arm, and gestures toward Him with the left, as if to say to us: "Behold the Lamb of God! Behold the Incarnate Word!" Both faces are drawn to convey theological meaning rather than realistic faces. Jesus’ face shows affection for his mother, but the large, expressive eyes show divine depths of wisdom and experience. Mary’s face in the original icon is as famous in Russia for its enigmatic expression as that of Da Vinci’s Mona Lisa in the west. Her mouth is thin and narrow, her nose long. Her eyes are very large. Her gaze is toward the viewer, but you cannot make eye contact. Mary is gazing at infinity or gazing within, with an ineffable expression of sorrow, as if recalling Simeon’s words, "...and a sword will pierce your own soul too." (Luke 2:35) The overall composition has the form of a triangle inscribed in a rectangle. This is intended to represent the mystery of the Trinity coming to reside in the world. The top of the triangle is shifted to the right, introducing suppleness, while Mary’s head inclines back to the left, centering her halo. Gold leaf is used on her halo and that of Jesus to express unearthly light, the divine origin of sanctity. Greek letters are inscribed on the background. "ICXC" is an abbreviation for Jesus Christ, Iesous Khristos. "MPØY" is an abbreviation for Mother of God, Meter Theou. Jesus is not dressed as a baby. He is wearing an adult cloak called in Greek a hymation. The cloth is woven with gold thread, symbolic of his divine dignity and royalty. His neck is drawn overlarge, representing strength and the breath of the Holy Spirit. Mary wears a maphorion over her dress. The original Lady of Vladimir’s maphorion is black, although nearly all Marian icons show it deep red like our version. Many repaintings and the ravages of time make it difficult to determine if the original’s was always black or is simply that color now. The maphorion is adorned with three stars on the head and shoulders (one is hidden by the child). These are symbolic of Mary’s perpetual virginity; before, during, and after her Son’s birth. 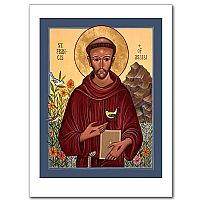 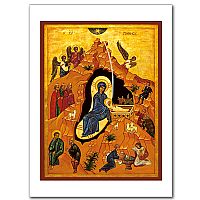 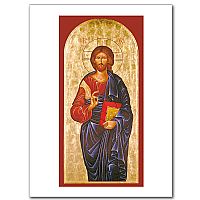