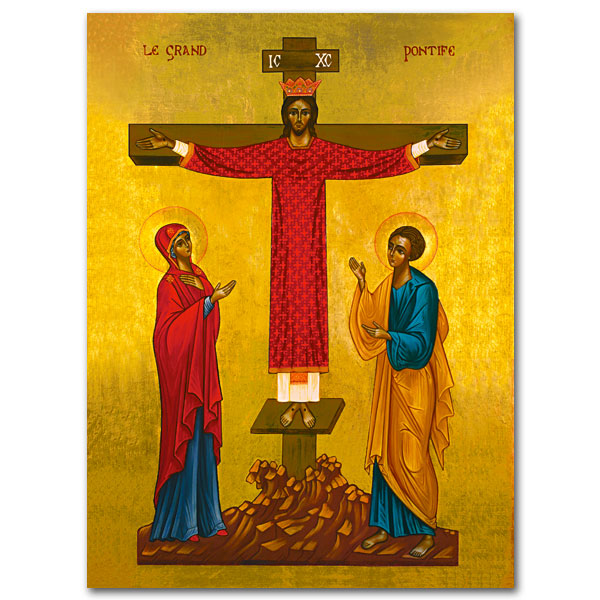 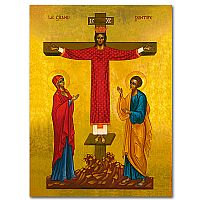 ...we have a great high priest who has passed through the heavens, Jesus, the Son of God...

The combination of the Crucifixion image with that of Christ the High Priest creates an icon rich with theological symbolism. The most obvious understanding of the image is that of the sacrifice of the Eucharist. Christ is the Priest, the altar and the sacrifice. He offers his body on the altar of the cross and himself acts as the High Priest who intercedes for the human race. St. Paul reminds us that while the sacrifice is made at the crucifixion, it is only when he has ascended that the gift is given to the Father. That is why we see the wounds in his hands and feet while he appears in his resurrected glory. While on the cross, Jesus imparts to the Theotokos “Woman, here is your son…” and to the Beloved disciple “Here is your mother.” This command represents Christ’s gift of the Church—represented here in the person of Mary. She is depicted wearing a red maphorion symbolizing the flesh she gave to Christ at the Incarnation. It bears three stars which represent her virginity before, during and after the birth of Our Lord. Mary and St. John raise their right hands—a gesture which indicates both an act of homage and intercession for the needs of the Church. Christ is depicted in his glorified state as the High Priest. Although somewhat stylized, he wears a red chasuble showing his sacrifice on the cross. It is curious that he is not shown with the omophorion, the cross-covered scarf worn by Eastern bishops, similar to a Roman archbishop’s pallium. Just as in some Orthodox churches bishops wear crowns, Jesus is adorned with a crown to show that he is King of Kings. Another unusual feature of this icon is the absence of the halo or nimbus around Christ’s head. Instead of the typical inscription given by Pilate to be placed above Jesus’ head (“This is the King of the Jews”) there is simply the Greek abbreviation of Christ’s name.