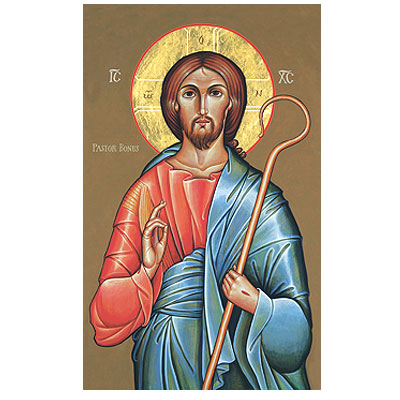 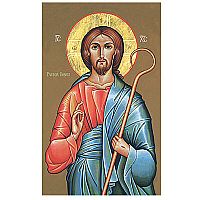 Christ the Benefactor is a classic motif in iconography, and depicts a sympathetic Redeemer, rather than the more stern “Lord of All” found in similar Pantocrator images. In these icons Christ is shown with a hand raised in blessing. The two extended and lowered fingers denote the dual natures of Christ. Jesus’ red and blue clothing represent His “humanity cloaked in divinity.” The rather elongated face, thin nose and relatively large eyes create a mystical appearance that draws one in to the Holy Face. The circular strands of hair represent the endless flow of time. To this traditional image of Christ the Benefactor Br. Claude has added Biblical imagery of Jesus as the Good Shepherd. His hands show the wounds of the cross because the good shepherd lays down His life for His sheep (John 10:11). His staff is turned outward to indicate that He is the true Shepherd who knows his sheep. This out-turned crosier is an appropriate symbol for the newly elected abbot of Mount Angel Abbey because the abbot is recognized by his monks as the one who takes the place of Christ in their community and the true guardian of the flock. (Incidentally, visiting abbots turn their crosiers inward in deference to the abbot of the host community). St. Benedict uses pastoral imagery throughout The Rule when describing the abbot as “not driving the flocks too hard” and “entrusted to watch over the sheep.” Christ's halo, the iconographic symbol for sanctity, is inscribed with a cross (the nimbus) and the Greek letters omicron, omega, nu, spelling "HO ON." In English, this becomes "The Existing One," the second half of the name used for God in Exodus 3:14 which is traditionally translated from Hebrew to English as "I Am Who Am." The abbreviated Greek form of the name Jesus Christ, "IC XC,” appears around the head of Our Lord. The face is the “true icon” and thus the name appears there. Sometimes in life, we may feel lost or without purpose. This icon serves as a reminder that we are always looked after with a shepherd’s care. Christ knows His own sheep and lays down his life for them. In contemplating this holy image, God’s Divine Will and infinite compassion draw us closer to the Pastor Bonus who left the ninety-nine sheep to go after the one that was lost (see Luke 15:4). 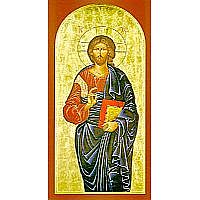 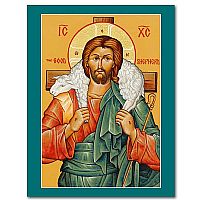 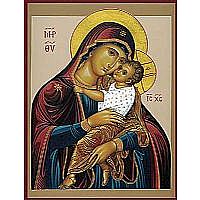 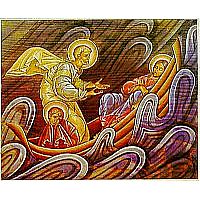 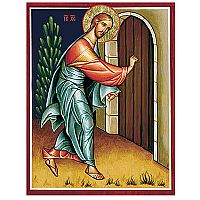